Ocular Genomics Institute researchers find a connection between changes in the extracellular matrix of Bruch’s membrane and the activation of the Alternative Complement Pathway in Macular Degeneration. 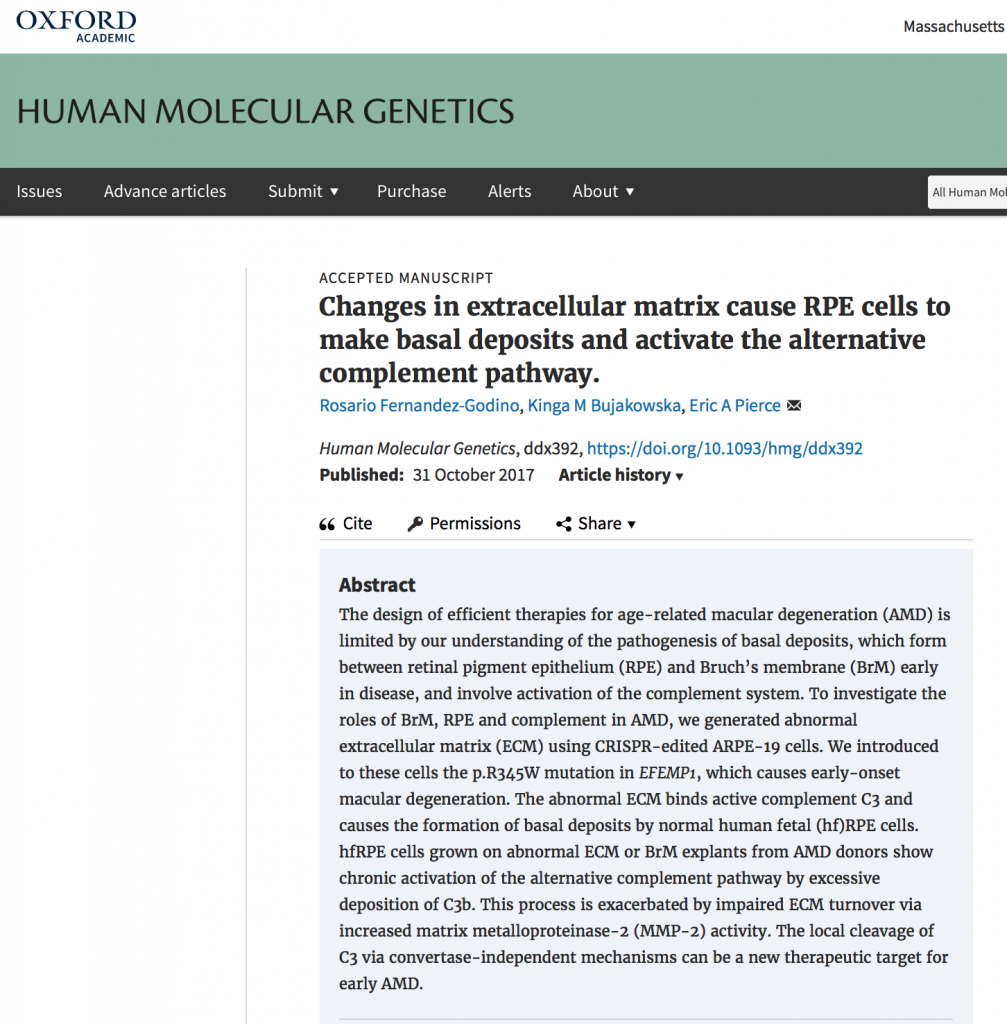 In a study published online this week in the Human Molecular Genetics journal, Drs. Rosario Fernandez-Godino, Dr. Kinga M. Bujakowska, and Dr. Eric Pierce of the Ocular Genomics Institute at the Massachusetts Eye and Ear, Harvard Medical School reported the remarkable finding that the formation of basal deposits in macular degeneration is primarily caused by activation of the alternative complement pathway triggered by abnormalities in the Bruch’s membrane.

Age-related macular degeneration (AMD) is a major cause of vision loss that affects more than 2 million people in the United States, unfortunately, there is no cure for AMD. The design of efficient therapies is limited by our understanding of the pathogenesis of basal deposits and drusen, which form between retinal pigment epithelium (RPE) and Bruch’s membrane early in disease. Multiple lines of evidence, including genetic association of complement variants with AMD, indicate that the complement system plays a key role in the pathobiology of the disease. Consistent with this, drugs that regulate the activation of the complement system have been developed for AMD. However, these medications have shown limited success in clinical trials to date.

In this article, Dr. Fernandez-Godino and colleagues have shown, for the first time, that the activation of the complement system in macular degeneration occurs via the alternative pathway due to abnormalities in the extracellular matrix of Bruch’s membrane. For these results, the investigators engineered RPE cells using the novel Clustered Regularly Interspaced Short Palindromic Repeats (CRISPR) in order to produce abnormal extracellular matrix that mimics the Bruch’s membrane of AMD patients. Further, the investigators cultured normal human fetal RPE cells on the abnormal extracellular matrix and on Bruch’s membrane explants from AMD donors. In both cases, the normal RPE cells showed chronic activation of the alternative complement pathway, resulting in increased cleavage of complement C3 and formation of basal deposits, which composition and structure was similar to the typical basal deposits found in AMD patients. The authors hypothesize that activation of C3 occurs via its physiological hydrolysis or tick-over, rather than via C3-convertase, which is the target of existing anti-complement drugs. The process has similarities with other diseases such as fibrosis, Alzheimer disease, and cancer.

The results reported here suggest that local alterations in complement activity participate in AMD pathogenesis earlier than previously described. Moreover, these findings could lead to the identification of novel therapeutic targets for preventing vision loss from macular degeneration.